Tutorial - Building A Language Server For Your DSL

Hey there, this is Christian. VS Code's Language Server Protocol opens up a new horizon of programming IDE development. And there's good news: Eclipse Xtext 2.11 will support you in building up a language server for your DSLs. With this post I want to demo that by means a pre-release snapshot starting with a blank desk. I gonna tell you about

So lets get started with the development IDE. You can use either the Eclipse Installer or, like me, choose a pre-build IDE. I suggest the OxygenM4 build of the "Eclipse IDE for Java Developers" package. Once downloaded, extracted, and running install the Xtext Complete SDK from http://download.eclipse.org/modeling/tmf/xtext/updates/nightly/. If you don't use an Oxygen package, make sure to have the latest milestone of Buildship installed, you'll get it from http://download.eclipse.org/buildship/updates/e46/milestones/2.x/.

With Xtext installed create a new Xtext Project via File → New → Project.... On the Advanced Xtext Configuration page you have to switch to the Gradle build system. Besides you may want to deactivate the Eclipse Plugin. 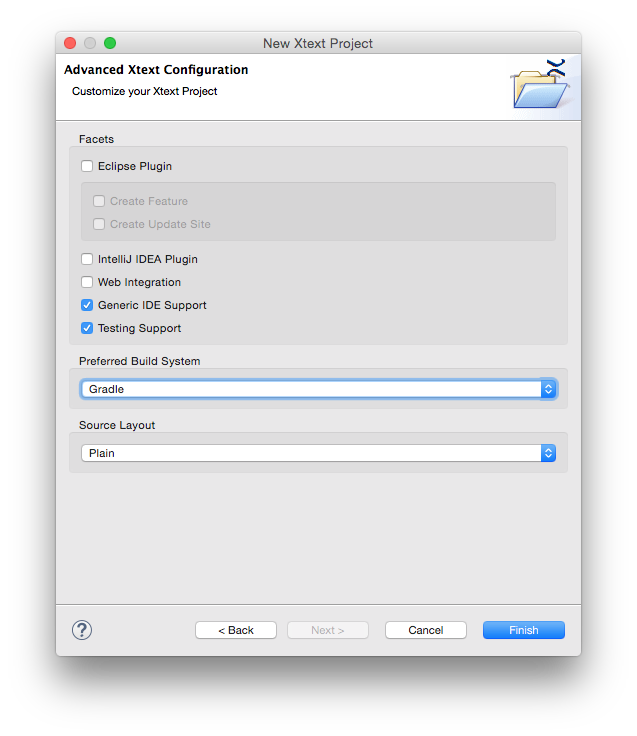 After finishing the wizard you find your workspace like this: 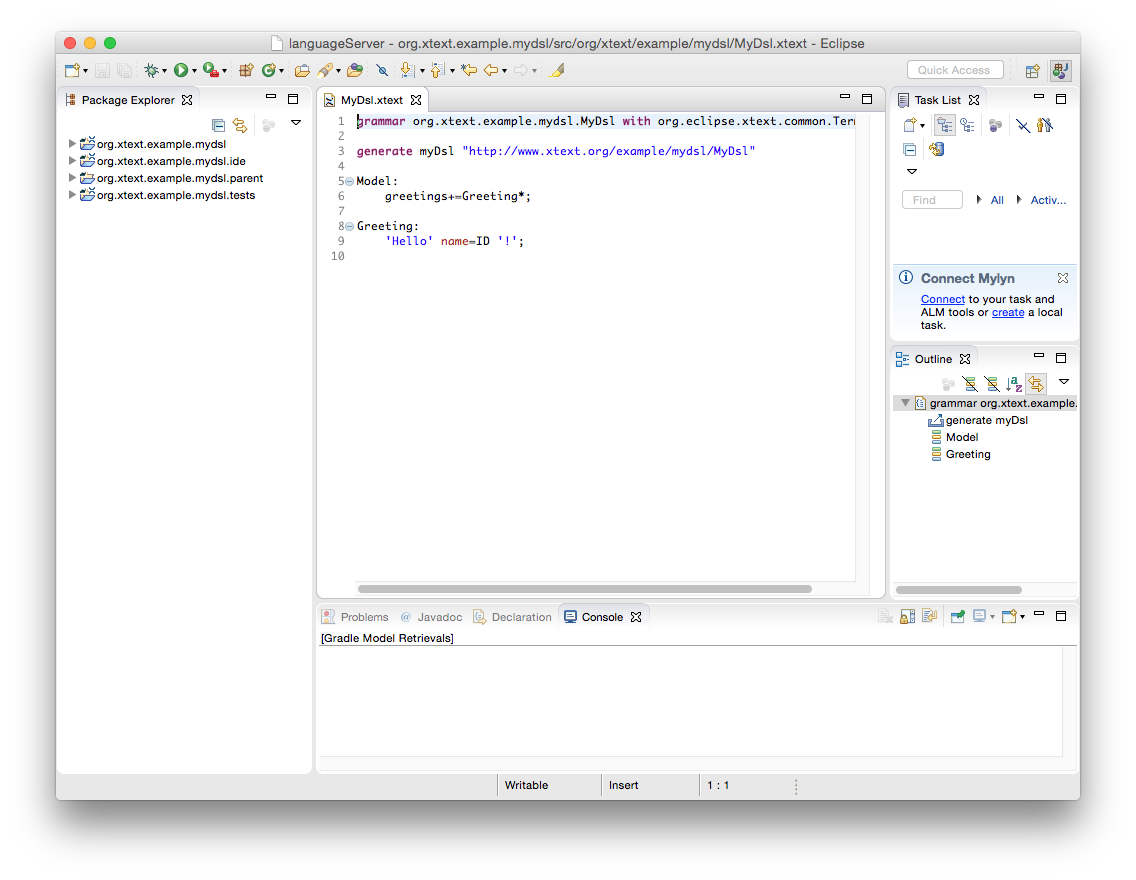 For simpler orientation in the workspace I suggest to switch to the Project Explorer that is able to present the projects in a hierarchical fashion. 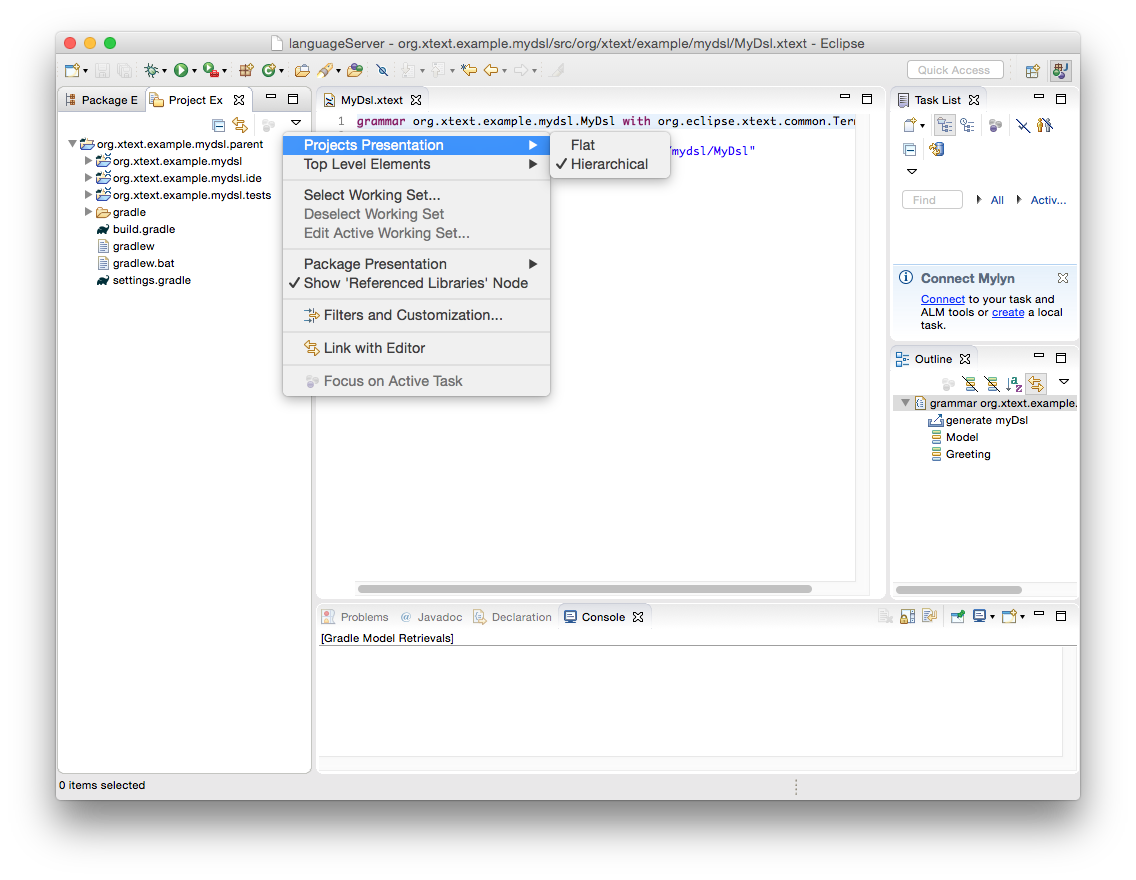 Now invoke the Xtext code generator as usual, e.g. via the context menu. 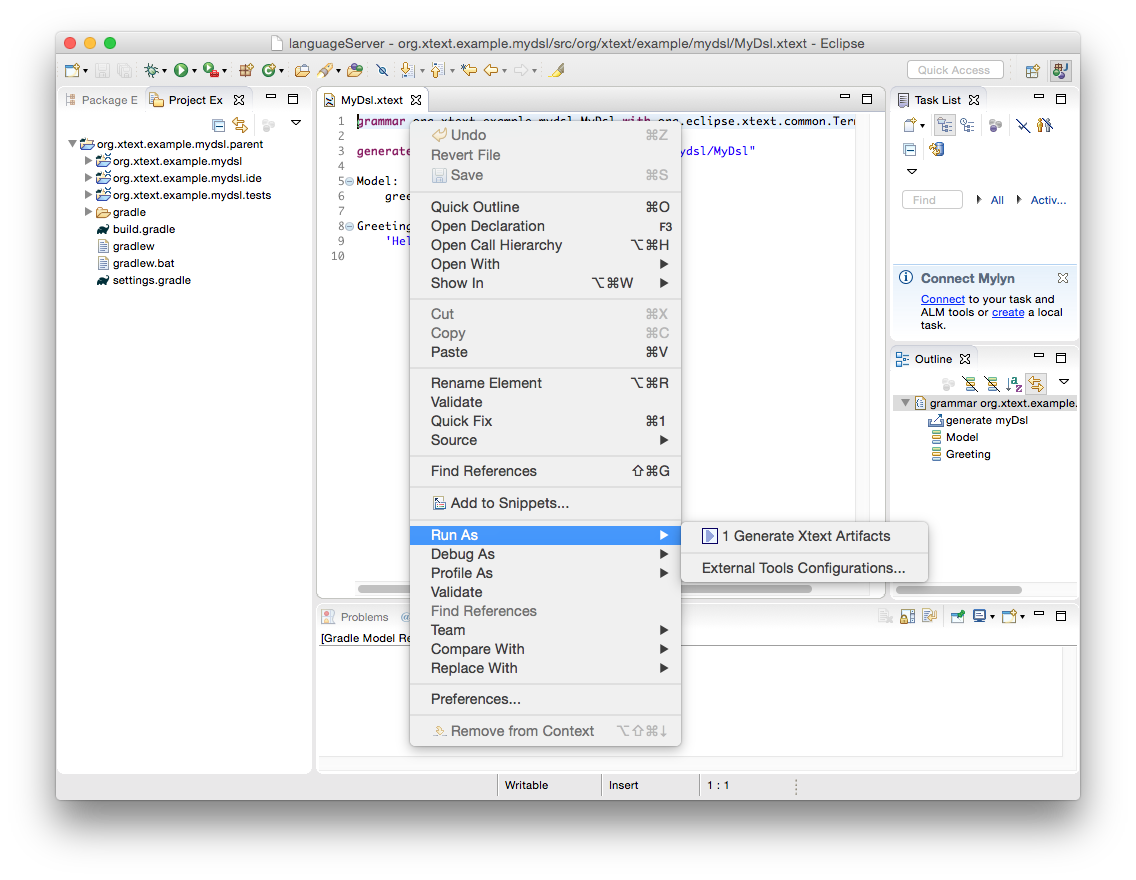 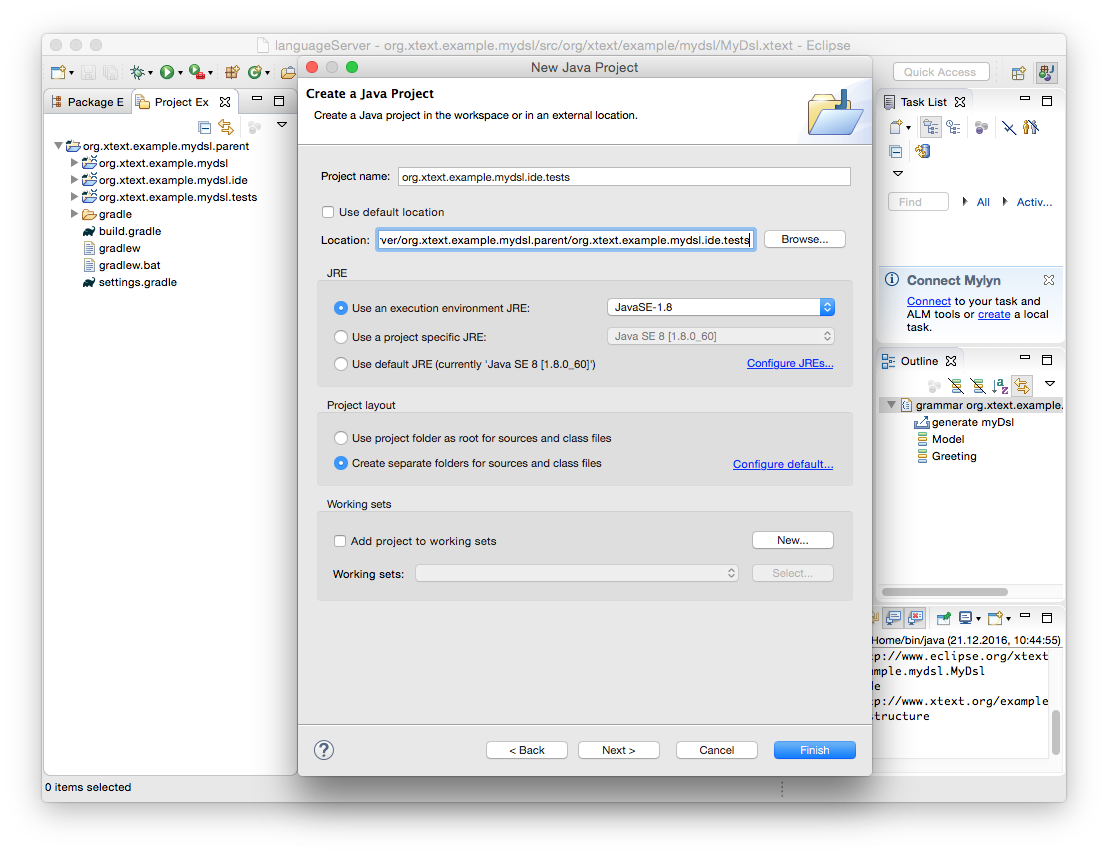 Include the new project into the Gradle build configuration by adding it to the settings.gradle  of the parent project, see line no 4 below: 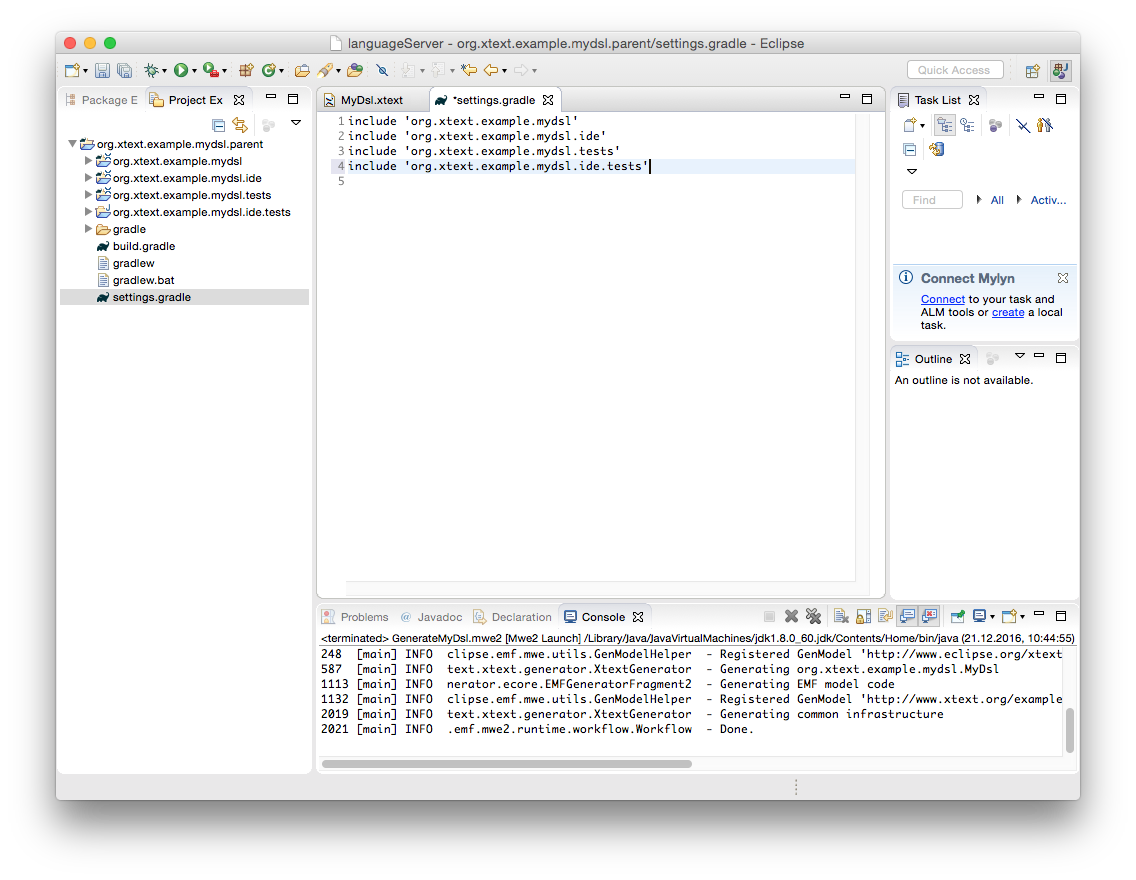 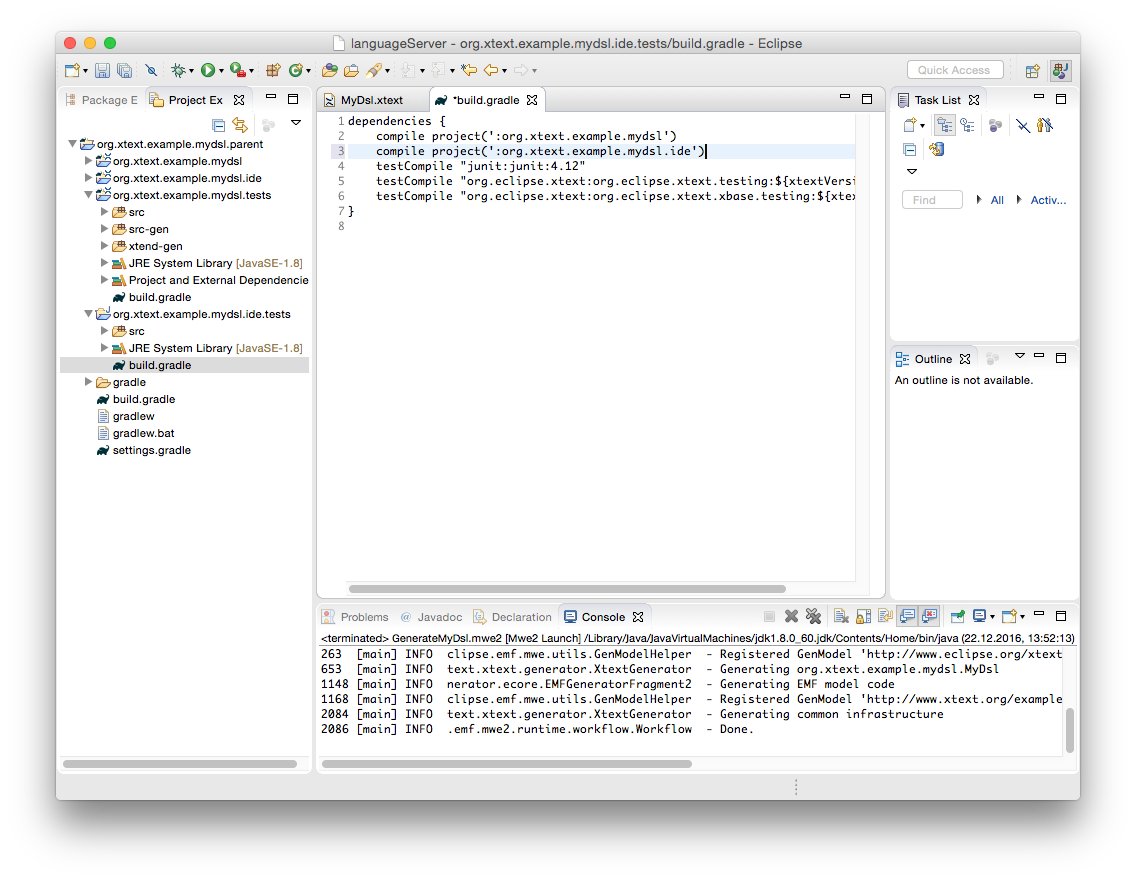 Having everything saved we need to poke Buildship, which connects Gradle and Eclipse, to re-evaluate the build settings. This is done via the context menu of a project – I just chose the parent project – → Gradle → Refresh Gradle Project. 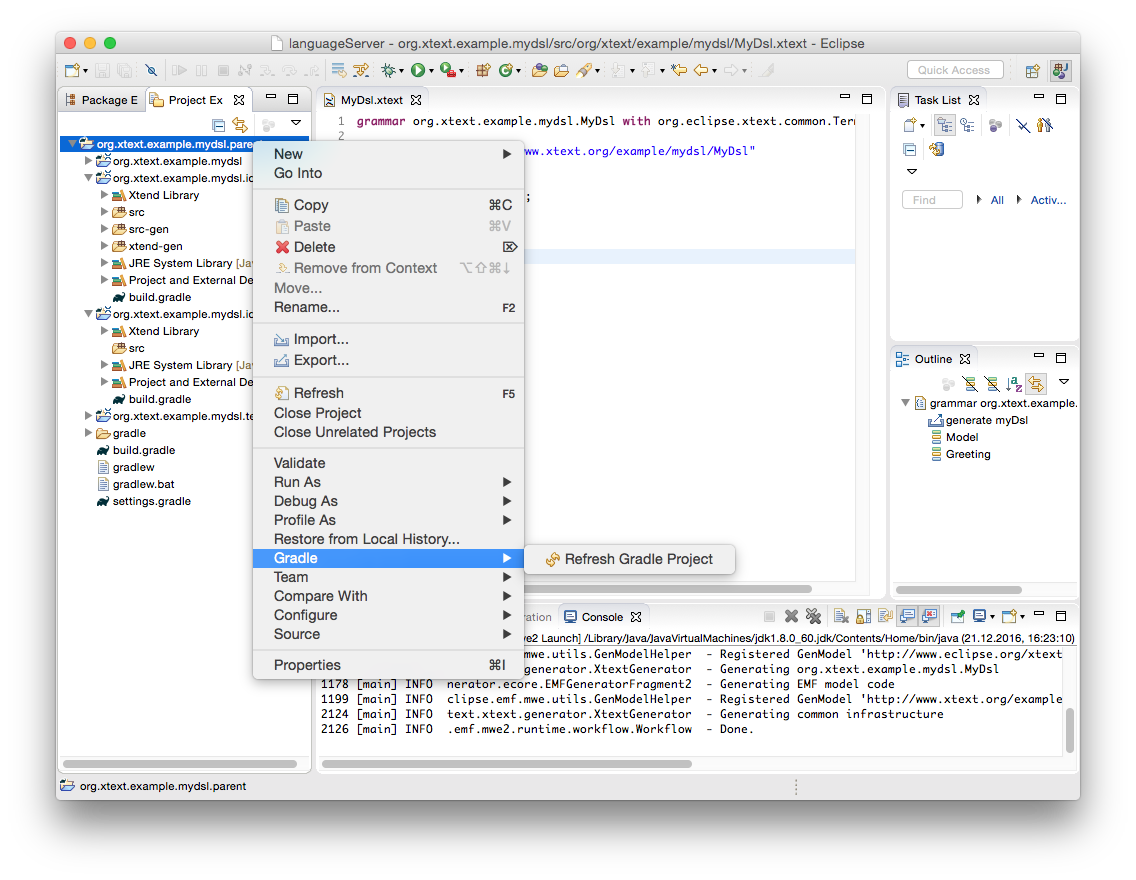 Create an Xtend class named org.xtext.example.mydsl.ide.tests.LanguageServerTest  in the src  folder of your new project with the super class org.eclipse.xtext.testing.AbstractLanguageServerTest . Add the following constructor and test method. 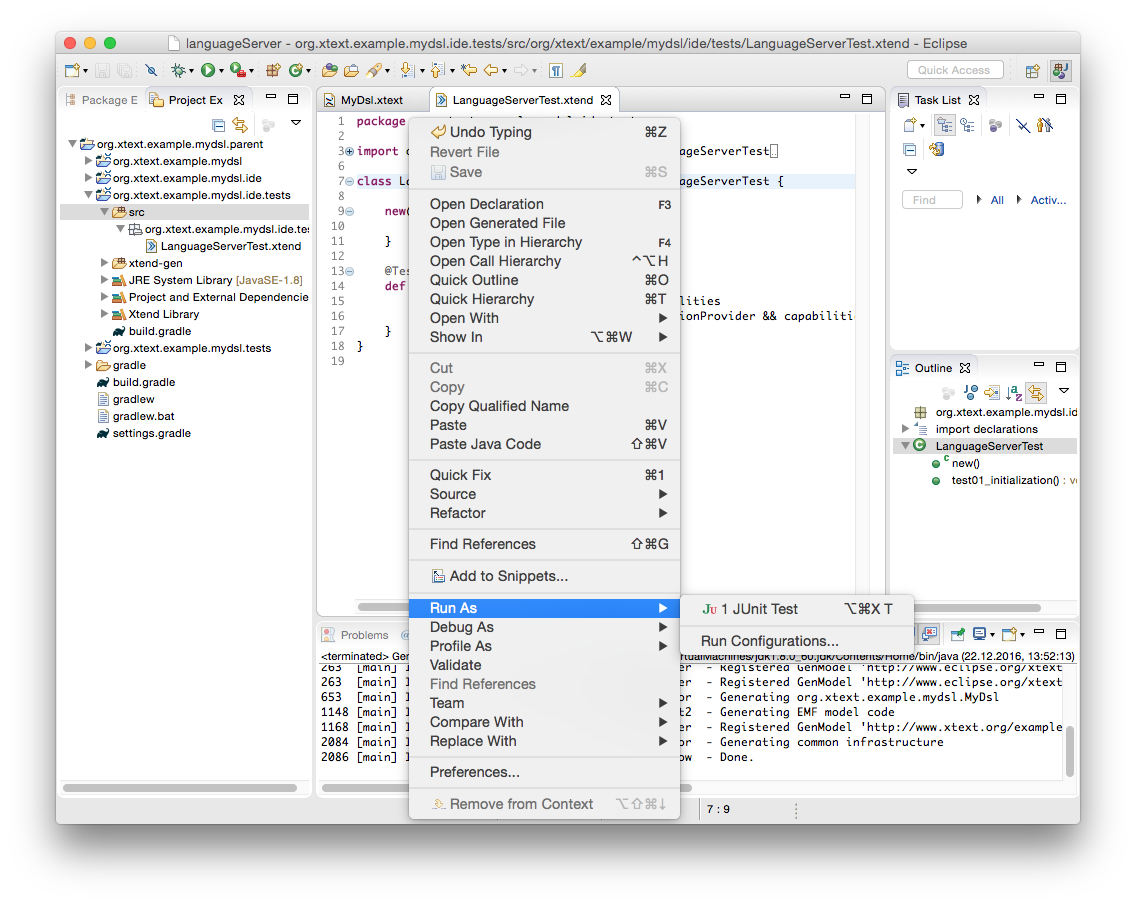 ... and checkout the result:

Last but not least let's test the code completion ability of your language server. The following test assumes a document with the content He , the cursor is located at the end of the line that is in column 2. The test expects the language server to offer a (single) completion proposal labeled Hello  replacing the prefix He  starting at line 0, column 0 and ending at line 0, column 2 with Hello .

Congrats! You build your own language server! For further reading on customizing your Xtext-based language server wrt. the grammar of your DSL, scoping & linking, formatting, and code completion refer to http://www.eclipse.org/Xtext/documentation/. Your DSL contains expressions? Have a look on this post. Finally, you wanna use your language within Visual Studio Code? Miro explains here how to achieve that.