Internationalization (i18n) aims to provide the necessary infrastructure in an application to translate it into different languages/locales. It has been a frequently requested feature for Theia, especially considering that Visual Studio Code – which Theia aims to emulate in most aspects – has supported i18n since early 2016.

Even though some attempts by contributors have been made in the past, as of mid 2021 Theia still had no support for different locales. Due to increased demand for this feature, we decided to pick it up.

Of course, the main technical inspiration for this feature has been VSCode's i18n implementation. In short: Inside of VSCode, every user-facing string is translated using a localize function call that accepts a key and the English default value. A special build process reads these function calls and extracts every key and default value into a JSON file. These files are then translated and each placed inside of a dedicated VSCode extension, dubbed as a "Language Pack".

The diagram below shows the basic flow of translation data throughout Theia. After loading VSCode language packs and additional localization contributions into a single localization service at startup, they are requested by the frontend before loading any other code. Having all translation data available at this point allows to use Theia's translation functions even at import time, which is crucial for commands. The localization can be used by every part of the frontend, be it menus, widgets, dialogs, etc. 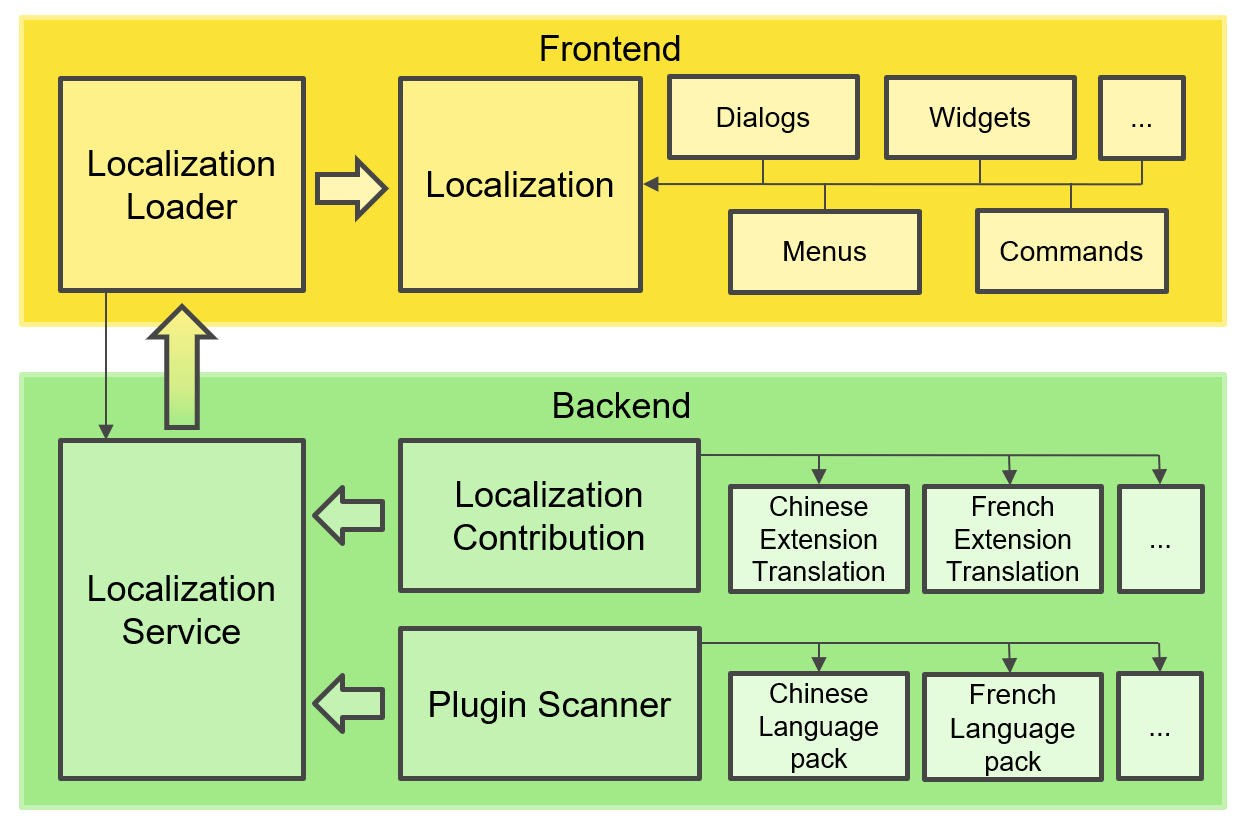 An overview of the i18n architecture in Theia

You can try it out by opening Theia in Gitpod or cloning and compiling it yourself. After installing a language pack of your choice by searching for the language in the extensions tab, run the Configure Display Language command and select your desired language. Theia will automatically reload itself and you'll be presented with a translated user interface.

Using i18n in your own Theia App

For example, a call like nls.localize('bye', 'Bye') will get translated into a simple JSON file:

This file can then be translated by hand or by using one of the many online translation services available. A German translation of this file might look like this:

Compared to VSCode, instead of Language Packs, Theia uses a LocalizationContribution, which is more in line with it's usual dependency injection based approach. In there, you can load your translated JSON files:

Now, after installing a Language Pack and changing to the de locale, every instance of the nls.localize('bye', ...) call will be translated to it's appropriate German counterpart. Be aware that the option to change to a different language is only available after a corresponding Language Pack has been installed, as the Theia framework depends on them to translate itself.

Internationalization is a very relevant topic for Theia, which is being increasingly adopted throughout the industry. Our contribution ensures that Theia is able to meet the demands of different consumers and users worldwide.

For more information and code examples, you can also take a look at the Theia documentation page.